Move It or Lose It 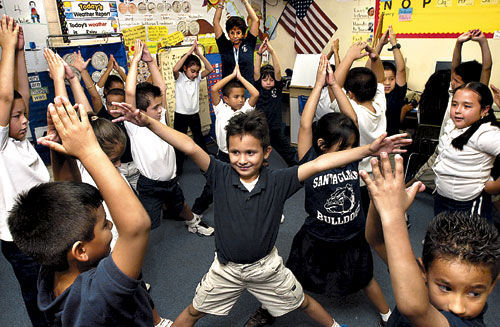 Image from Center for Education Improvement.org

Classrooms have traditionally been sedentary places. Well-behaved children sit in their desks and quietly absorb the information teachers offer and spit it back on tests and quizzes. If they work hard, they do well. If they don’t…well, they should have worked harder.

But this is 2019 and we know that for some, sitting still in a chair for hours on end is practically impossible.  As adults, we often have highly-developed strategies for dealing with the inertia and boredom that comes from being forced to sit and listen endlessly to speakers. We doodle.  We sneak looks at our phones.  We go to some mental “happy place” and have fun redecorating our living rooms or planning our gardens.  We make plans for our next fantasy football draft.  We hold whispered conversations with the person next to us.  If the speaker obligingly dims the lights for a PowerPoint, we may take a little catnap.

Kids use these strategies, too, but they are far less subtle.  They put their heads down on their desks, play on their phones, act out.  Worse, they don’t retain the information.  When the test rolls around, they bomb it because they checked out at some earlier point and didn’t learn the material.  Data that has been around since the late ’70s (40 years!),  clearly links movement in the classroom to improved cognition.  It’s not hard to connect the dots: Improved cognition = better retention = more learning. In spite of this, the passive, sedentary model persists.

A study from 2011 sought to discover what effect movement in the classroom has on cognitive ability.  The researchers studied children over a 3-year period in which the students were divided into two groups.  Group 1 was a traditional classroom environment, mainly sedentary.  Group 2 was the PAAC classroom with physical activity built into the lessons — 90 minutes of moderately vigorous physical activity per week, scattered throughout math, language arts, geography, history, spelling, science, and health. Activity was integrated into the lessons so that moderately vigorous movement was part of the learning (using an alphabet mat to jump to letters as students learned spelling rules, etc.)

The positive effects of the study were impressive:

And just in case you were thinking that this sort of thing is all very well and good for elementary classrooms, physical activity of any kind works just as well in secondary and even college classrooms.  Learning doesn’t have to grow more sedentary the older one gets.

The Tortoise, the Hare, and the LSAT
Thoughts From Inside the Bubble