The Tortoise, the Hare, and the LSAT 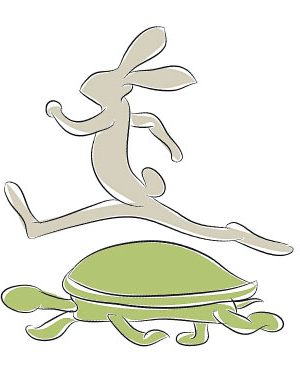 FINALLY, Malcolm Gladwell is back with season 4 of his Revisionist History podcast and he does not disappoint.  In the first episode, he explores the LSAT from one highly specific perspective:  time.

Performance on the LSAT determines what law school students get into; those who are both accurate and fast do best on the tightly timed sections of the test. How tight?  The expert prep consultants Gladwell interviews say you should feel “breathless” when you take the test. Breathless because you cannot read anything too deeply or pause much to reflect; you must forge ahead,  only going back to re-read if a question demands it.  Detail goes by the wayside as you process the most key information necessary to proceed.  Thus law schools are able to sort prospective students into high, average, and low categories.  The high flyers go to the most prestigious  schools; the average and low students go to schools lower down on the ladder. Some low students don’t go at all.

Everyone knows the story of the tortoise and the hare. The bragging hare races the tortoise but has such a commanding lead that he takes a nap while the tortoise, slow and steady, passes him to win the race. Except on the LSAT, the tortoise loses.

The most interesting thing about the podcast (which also ventures into the realm of chess playing for reasons which are immediately apparent) is what it exposes about the arbitrariness of tests like the LSAT.  Generations of students have absorbed the judgement of the LSAT, defined themselves as students by its results, when in fact, the test is specifically constructed to favor a particular type of student — the hare —  who skims over material to get the most accurate answer the fastest.  A study conducted by William Henderson at the University of Chicago Law School, however, demonstrated that when time constraints were removed, a whole different student dominated on tests:  the tortoise, who although slower, was more organized, more careful about detail.  Many more people had success on exams in law school when they had sufficient time to process and construct.  The time constraint gave them a false impression of their abilities as students. Many students who scored only “average” on the LSAT actually possessed qualities that made them highly desirable as lawyers. Qualities the LSAT has chosen not to measure.

The wider implication for education as a whole is this:  sometimes it’s not the content but rather the context that is hindering student success. All tests have contexts — conditions under which mastery is demonstrated.  Timed or not timed, multiple choice or short answer or essay, computerized or paper and pencil, reading passages over or under 600 words — all are part of the context of the test, and the impact of context should not be underestimated.  There are hundreds of companies like the one Gladwell visited, preparing people for the LSAT, the GRE, the MCAT, the ACT, the SAT, AP exams, etc. There is only so much they can do to remediate content, so most of them focus on context.  They have students practice taking the test over and over, replicating the conditions of the testing environment as closely as possible.  Sometimes they offer “hacks:” ways to approach material in order to deal with the time constraints.  A major hack for ACT Science is to understand that no one is actually expected to know the science under discussion.  The science is a distractor: the test is really a reading comprehension/chart interpretation test rather than a measure of what science concepts you know. Understanding that changes how students approach the test. A hack Gladwell learned for the LSAT was to skim reading passages for key ideas and then go through the section and eliminate the two worst answers from each question, thereby reducing his choices to the most viable. If he had to guess — and under such a tight time constraint, he was definitely going to have to guess — he could at least improve his odds of guessing correctly.

CMSI has, since its inception, counseled districts to backload from released items those skills students need to be successful on external tests. This is not really “teaching to the test,” but rather ensuring that the skills needed for the test are practiced in the same way mastery is demonstrated on the test. Certainly there are skills such as comparing and contrasting or quadratic equations that need to be practiced, but contexts need to be practiced as well.  If there is a time constraint, students must practice demonstrating mastery under the same time constraint.  In this way, student success is less dependent on the context.

If your district would like assistance in learning how to identify critical skills and concepts and backload them into your curriculum in ways that replicate the contexts and cognitive demands of external tests, contact us. We would love to help.  And if you want to listen to Revisionist History, you can find it on Apple’s native podcast app, on the RH website, or wherever you listen to podcasts.

Picking Apart the Daisy Chain: Standardized Tests as Predictors of Success
Move It or Lose It