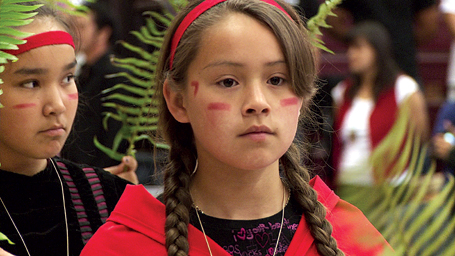 If you spend any time researching equity, you will begin to notice a pattern. It’s not a particularly overt pattern; it’s more like something that creeps into your field of vision from the edges. Only when you turn your full attention to it does it become glaringly obvious — so much so that you wonder how you missed it. I’m referring to how indigenous people are presented in U.S. education; the problems here are manifold. Here are the highlights:

A 2015 study from Penn State determined that that 87% of the state standards that specifically included indigenous people and cultures in the U.S. were pre-1900 and 27 states didn’t name any individual indigenous people in their standards (i.e., Chief Joseph, Powhatan, etc.).  Essentially — at least according to U.S. history textbooks — once indigenous people were sorted onto reservations, they ceased to be a factor in modern America.   This is demonstrably not the case; across the U.S., Native American tribes are active and important forces in conservation and they are often important economic forces as well, creating thousands of jobs and paying millions in taxes. Indigenous peoples are also important forces in education, forming and running language immersion schools to revive tribal languages.  It’s worth mentioning that treaty negotiations are still ongoing as U.S. companies and the government attempt to co-opt tribal lands by arguing over things such as the legal definition of a tribe.

Textbooks frequently frame the relationship between European explorers and indigenous peoples in overly simplistic terms.  This can range from failing to instruct about the myriad peoples and cultures who already inhabited the Americas prior to European arrival (and their many architectural, artistic, political, and intellectual achievements) to a vastly oversimplified narrative of initial cooperation with colonists changing to opposition that needed to be dealt with before the colonists could realize manifest destiny.  Still less do they look at the Mission system in California and other Western states with its feudal organization amounting to the enslavement of the indigenous tribes.  Textbooks seldom explain that the decimation of indigenous people by novel European diseases caused such a collapse in population that it profoundly impacted social, political, and economic activity for tribes who experienced it.  History talks about how the Black Death had this effect in medieval Europe, but fails to make the same connection with indigenous peoples during the colonial period. One thing nearly universally ignored is how native peoples were treated by the colonists, practices (such as attempts to infect the natives with small pox and their policy of wiping out entire villages of women, children, and elderly people) that would be called ethnic cleansing or genocide by today’s standards.  Instead, indigenous peoples are sometimes presented as little more than obstacles to be overcome as colonists pressed further into the interior of the country. Good examples of this are resources that examine the California Gold Rush and the Oregon Trail from the White settler’s perspectives, but fail to include indigenous perspectives on the devastating effects these events had on their way of life as their lands became attractive to those hoping to become rich.

This is less connected to state standards and more of an issue with resources teachers may use in their classrooms. We have encountered worksheets from online sources that grossly misrepresent native people or are profoundly insensitive.  Indigenous people are often grouped indiscriminately with no attention to differences between tribes in how they dressed or lived, defaulting instead to a generic plains-Indian representation.  Worse, some children’s literature has capitalized on Native American culture and invented “traditions” that appear nowhere in tribal history or practice.  Even a Caldecott winner falls into this category.  There is also uncertainty around whether some supposed speeches by figures like Chief Joseph (Nez Perce) were reported accurately (since Chief Joseph spoke no English)  or whether they even occurred at all, never mind that they are in nearly every history book in the U.S. and presented as unassailable fact.

There is some movement in a positive direction.  Montana and Washington have pioneered mandates of indigenous instruction to try to bring more information and discussion into classrooms.  Washington even uses the word genocide in its standards. We have seen elementary Social Studies artifacts that explore tribal cultures in various geographic regions in the U.S. But we need more and we need it at more depth.  It can be hard to find indigenous voices telling the story of European colonization from their perspective or making connections between the past and the present.  Four sources I think are helpful here:

American Indians in Children’s Literature: begun and run by Dr. Debbie Reese, a member of the the Nambé Pueblo tribe, this huge site offers reviews of children’s books from an indigenous perspective. AICL calls out racist imagery and language, and stories that purport to be native but are pure invention.  Be prepared to have some classics raked over the coals:  she rightly calls out Clifford’s Halloween and Little House of the Prairie for, respectively, racist imagery and attitudes that promote the erasure of Native peoples (as when Pa says he wanted to go where “there were no people. Only Indians lived there”).  It also has a section called Best Books, with an archive of recommended books by and about indigenous people and a section with lists of Native American writers and illustrators.  There are other topics as well, such as tips for teachers as they develop instructional materials and a post on Problematic Phrases — expressions often included in conversation or writing that denigrate Native Americans.  This is a rich site deserving of a bookmark in your browser and regularly scheduled visits to keep up with books under review.

Native Knowledge (NK 360): This site, run by the Smithsonian Museum of the American Indian,  is an amazing repository of instructional support.  Of particular value are the Essential Understandings surrounding the teaching of Native cultures, which range from diversity to economic and civic structures.  There’s also a fabulous page of resources for teachers with many, many lessons on history, civics, STEM, and geography as they relate to indigenous cultures and accomplishments.  These are lessons written from an indigenous perspective and they often explore topics at some depth. Where a typical class would cover the Trail of Tears (also known as the Indian Removal Act) over one or two lessons, this site offers at least 5 lessons on Indian Removal from a Native perspective and each lesson comes with a study guide and a list of associated resources that range from blog posts to NPR recordings.  Each lesson also specifies which tribes are under discussion — Native American, after all, encompasses a huge range of diverse cultures.  There are lessons on the Native perspective on Thanksgiving, the Inca system of aqueducts, why Native American isn’t a costume, how the European fashion for beaver hats is related to the purchase of Manhattan, ways in which tribes are revitalizing Native cultures today, and so on, all keyed to particular grade levels.  Some lessons are offered in Spanish as well.  Not only is this a great site for instructional materials, it’s a great site for teachers to educate themselves about indigenous perspectives.

Birchbark Books: Owned by author Louise Erdrich, a member of the Turtle Chippewa Nation, this store in Minneapolis, Minnesota offers hand-picked titles from indigenous authors and illustrators, ranging from children’s books through poetry, fiction, history, and memoir/biography. There’s even a large selection of games, including language learning games for the Ojibway and Lakota languages.  While this selection may be a little Minnesota-focused, the ability to find vetted, Native-created books makes this an important resource.

Toolkit for Rewriting History for the Better: This is a list of online sources for teaching about native cultures and perspectives curated by Learning for Justice (formerly Teaching Tolerance).  It’s got links to a number of sites with objectives, essential questions, and activities from some state repositories like Utah and Montana (which is pioneering culturally responsive instruction about Native Americans), and some national organizations as well.

One critical change that needs to occur in American classrooms is pacing.  Native Americans will never get more than glancing attention in Social Studies courses if we don’t slow down and offer time to explore topics at depth.  I think it’s important to look at what kids are required to learn and ask how critical all this information is in the long term when weighed against other information about people and cultures that are very much still with us.  Do we need to know about the panic of 1837 or can we instead go deep on the Indian Removal Act and explore perspectives and analyses in ways that help us better shape our understanding of how indigenous people were and continue to be impacted by it?  Prioritizing Native perspectives and voices is a good first step.

Middle Schools and the Problem With Research
Indispensable Books for Equity #4: Cultivating Genius