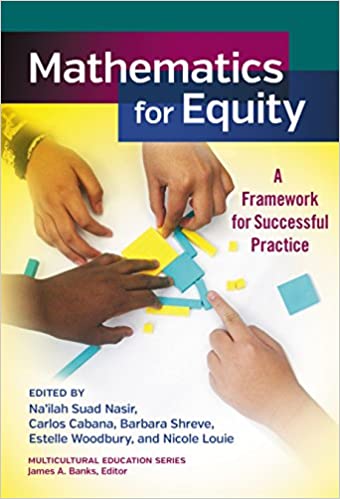 Book #3 in this series, Mathematics for Equity: A Framework for Successful Practice, edited by Na’ilah Suad Nasir, Carlos Cabana, Barbara Shreve, Estelle Woodbury, and Nicole Louie,  is one that got me very exited about Math instruction. As a former English teacher, that is not a sentence I ever thought I’d type, but the instructional model presented in the book embodies all the things we tell districts to do if they want to improve learning for students. To see it lived out in classrooms and to see the effect it had on students both academically and personally, and to see how it impacted equity, was — and I am not being facetious here — thrilling.

The model was the brainchild of a high school in California (dubbed “Railside” to protect student and teacher identities) and became the subject of a university study in which it was compared to two other high school math programs in two other high schools near by, both in suburban settings.  Railside High was an urban school, culturally and linguistically diverse with many language learners and students whose families had few financial resources. In fact, if you look at the demographics of Railside High, you would immediately see risk factors for lower achievement: high population of ELL students, low percentage of parents with college education,  high population of minority students (80%), highest proportion of FRL among the schools compared, and so on.  At the beginning of the program, 9th grade students were achieving at significantly lower levels than the students from the other, suburban schools in the study.  By the end of the first 2 years, Railside students were consistently outperforming students from the other two schools and achievement differences between ethnic groups were reduced in all cases and eliminated completely in most. Not only that, the Railside students were more positive about math, took more math courses in high school, and more of them planned to pursue mathematics in college than the other two schools.  Stop and take that in: they were so dialed in to their math classes that they wanted to keep studying math.  MATH.  I think it’s fair to say that this is not generally the response from your average high school student, and it’s definitely not the response from traditionally low-achieving kids.  How did they get these results?

Reading the book will give you the most detailed explanation, but here are a few important tenets of the model.

I could write on this book for days; what I’ve written here doesn’t begin to do it justice.  It’s packed with information and ideas and the model is clearly delineated for those who want to follow it.  What’s most encouraging are the results, especially the results between ethnic/racial groups, even though the program was not built around race/ethnicity in any way.  Instead, it committed to raising the bar for all kids and redefining what it meant to “do math,” turning a mostly individual activity into a collective, inclusive process.  It’s not hard to see how the model could be replicated in other content areas and at other grade levels, so long as the philosophy holds constant and groupworthy tasks are carefully constructed.

If you’ve wondered how to practically enact academic equity, this is your guidebook.