Who Was Nina Otero-Warren? 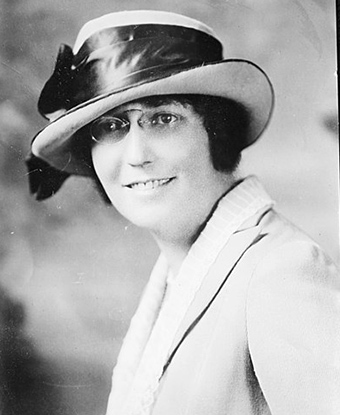 Let’s break with some of the heaviness of 2020 and get historical for a moment.  Nina Otero-Warren was the Santa Fe Superintendent of Instruction from 1917-1929, and also, briefly, the Inspector of Indian Schools in Santa Fe County. She was one of New Mexico’s first female government officials and she instituted a number of policies that have proved prescient in the education of Hispanic and Native American students, though at the time they were considered radical and even subversive.

Her goal was to change the existing curriculum so that it emphasized bilingual and bicultural instruction.  This was at a time when education in the Southwest (and other places) was meant to expunge traces of otherness, both cultural and linguistic, and children were routinely punished for speaking Spanish in the classroom or on the playground.  Otero-Warren wanted to strike a balance between curricular requirements and Spanish cultural values. As a member of the wealthy Mexican landowning elite that was systematically disenfranchised (and continuing to be disenfranchised during Otero-Warren’s lifetime) by White landowners and White culture after New Mexico became a state, Otero-Warren wanted to preserve Spanish heritage and values.   While federal laws mandated English-only in classrooms, Otero-Warren argued for bilingual instruction in schools — something that more recent research has shown to be highly beneficial both academically and social-emotionally.

In her role as Inspector of Indian Schools, she advocated against sending indigenous children to boarding schools away from their reservations — again, a method of forcing assimilation to White, European-American culture.  Conditions in Indian schools were often appalling, providing only subsistence nutrition and ruthlessly expunging expressions of native culture or language — dress, hair, language, even names were changed to reflect mainstream culture as a method of “civilizing” students.  Many schools also abused students physically, mentally, and sexually and because students were often far from home, they lacked both anyone to report this to or to advocate on their behalf.  A vocal critic of the Indian school system, Otero-Warren sought to integrate opportunities to learn about indigenous culture, history, and practices and made efforts to improve cooperation between native families and local schools.

Otero-Warren was also a prominent suffragette, lobbying New Mexico’s congressmen to vote in favor of the Nineteenth Amendment.  She even ran for congress herself in 1922, the first Hispanic woman to do so in the U.S.  She lost primarily because her status as a divorcee came out during the election, but also because of concerns surrounding her advocacy for Spanish-language instruction in schools.

Now, before we get all dewy-eyed about Nina Otero-Warren, we have to acknowledge that she was not a perfect individual.  As a member of the Mexican landowning class and a politically influential family, she was part of the disenfranchisement of indigenous peoples. That she later protested the White, American disenfranchisement of Mexican peoples in New Mexico is not without its irony; one of her platforms in her bid for a congressional seat was the restoration of communal land grants to Hispanic landowners, so her level of woke with regard to the plight of Indigenous people was not all that it could have been.  Some might argue that her approach was just a kinder, gentler assimilation rather than a pure upholding of Spanish or Indigenous linguistic and cultural rights.  But for her time she was advancing ideas about education that were counter-cultural, counter-intuitive,  and revolutionary.