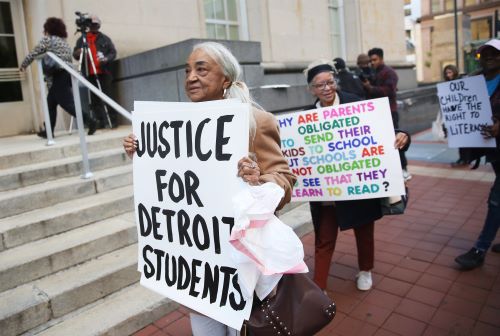 On April 23, 2020, the Sixth Circuit U.S. Court of Appeals found that the U.S. Constitution includes a right to “a basic minimum education,” which lawyers claim the state of Michigan denied to a group of Detroit Public School students.

Suit was filed in 2016 on behalf of students from some of the lowest performing schools in Detroit. The suit argued that the education provided to students was so poor they could not exercise their constitutional rights to vote, serve in the military, and serve on juries.  The suit cited conditions in the schools that made it impossible for students to achieve basic literacy.  Among the citations were:

In fact, the decision noted that students attend “schools in name only, characterized by slum-like conditions and lacking the most basic educational opportunities that children elsewhere in Michigan and throughout the nation take for granted.”

The U.S. Supreme Court ruled in 1973 that there was no constitutional right to education or education funding per se.  But, as one of the attorneys for the plaintiffs pointed out, the Supreme Court has said affirmatively that “you cannot compel people to do something and then not deliver on what you said you can deliver on.  You can’t put children in school for six or seven hours a day [based on] compulsory education laws and then not deliver an education any more than you can put a patient in a mental hospital and then not provide treatment.”  This is what the Detroit plaintiffs say makes their case different:  they aren’t just receiving an education that’s not as good as other districts, they are receiving an education so inadequate that they can’t exercise their other, undisputed constitutional rights. Their illiteracy precludes them from participating in the U.S. democratic system.

The impact of this decision can’t be overstated.  The 6th Circuit covers Michigan, Ohio, Kentucky, and Tennessee.  These states will now be held accountable for supplying education sufficient to provide basic literacy to all students.  What “basic literacy” means, how it will be quantified, is not yet clear and will likely entail more legal wrangling to define.  And certainly politics will play a role, but hopefully not one that works to continue a system which is clearly broken.

Read more about the decision here,  and about a similar case in Rhode Island.

State Standards: Not a Substitute for Curriculum
Public Schools, Race, and COVID-19