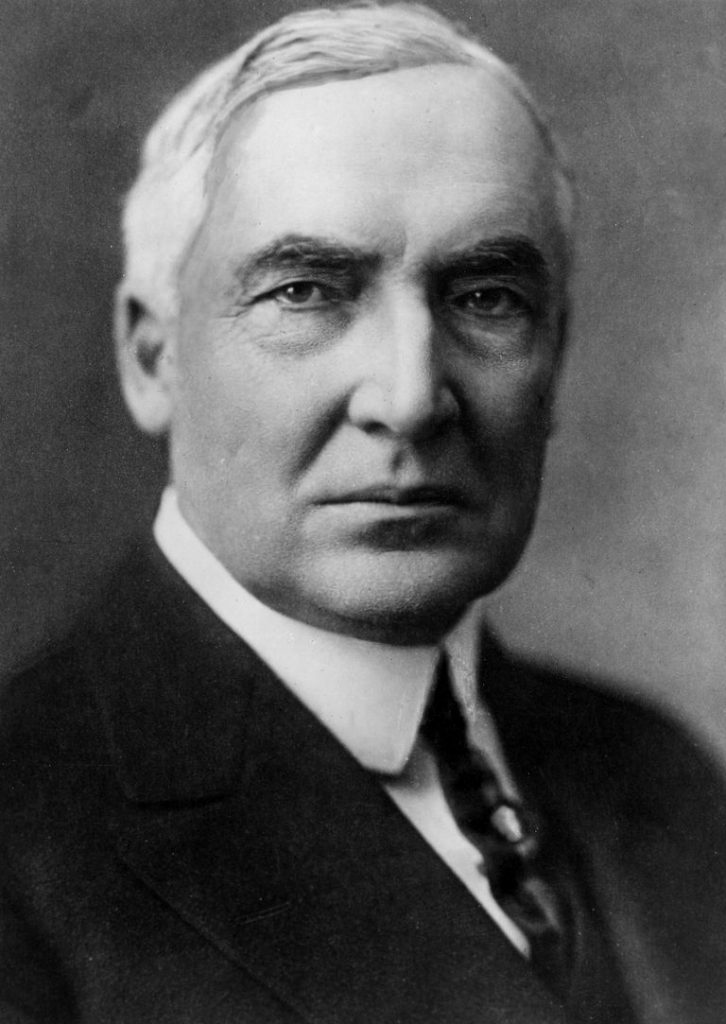 Warren Harding was the 29th President of the U.S.  He is widely regarded now as one of the worst presidents in U.S. history.  He wasn’t especially bright, and was at best a rambling speaker. As a senator, he was conspicuously absent for the debates on both women’s suffrage and prohibition, the defining events of his time.  He never managed to distinguish himself politically, yet, in spite of this he became the Republican presidential candidate in 1920 and went on to be elected that fall. He served two years as a sort of dignified political vacuum before dying of a stroke.  His only achievement was to father an illegitimate child with his mistress in a White House closet.

But Warren Harding looked like he’d be a great president: he had the handsome face, the physique (he was tall and built), his hair was silvering in a distinguished way, he had a rumbling baritone voice.  In every way he was the very image of a president, except that it was all window dressing. Behind the trappings was a man whose life revolved around drinking, golf, and illicit affairs with whatever compliant women he could find. Yet even in the face of his complete lack of suitability, people clung to the idea that he would be a good president.

This is the Warren Harding Error:  when we make unconscious assumptions about a person or people and hang on to them even when presented with evidence to the contrary.

Implicit biases like this can be dangerous. We can assume things, positive or negative, that simply aren’t true or that are far more nuanced that we allow ourselves to admit, and because they are implicit and unconscious we may not even realize how those assumptions are affecting our behavior.  Extensive research has shown that tallness in men translates to substantially higher salaries than their shorter-but-equally-talented counterparts.  Other research has demonstrated that white and black children with identical test scores do not have identical rates of referral to gifted programs if both have white teachers. In the one case we give credit where credit may not be due, and in the other we withhold that same credit in the face of evidence that credit is due.

Biases often change with awareness and education, but how do you become aware of something that is unconscious? That is nudging you in ways below your ability to perceive?  We can check ourselves and our schools by carefully examining data: what is the ethnic make up of our GT program? Our SPED?  What is the ethnic distribution of suspensions and discipline referrals?  Does our cadre of teachers reflect the ethnicity of our students?   If any these are slanted toward one or more groups, there may be some implicit biases at work. As auditors, we often see gifted programs with few children of color and SPED programs with too many children of color.  Black children also comprise by far the highest rates of discipline referrals and suspensions, particularly black boys.

The good news is that these attitudes aren’t static.  Focusing on positive examples of various ethnic or gender groups helps to shift our mindset, also in ways we can’t consciously perceive, but in ways that improve our implicit associations. Is this enough to solve our implicit bias problem?  No, but it does give us hope that if we do the hard work of breaking down those biases, we can achieve some measure of true equality.

Thoughts From Inside the Bubble
The Implications of Implicit Bias