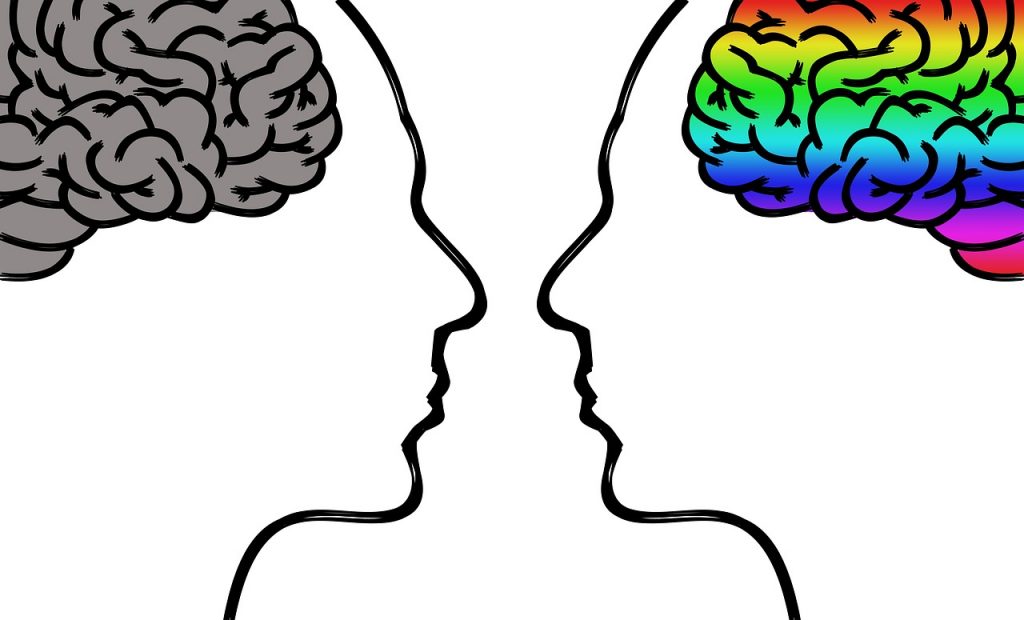 Brain research never fails to fascinate me. Recently, I listened to Hidden Brain’s  interview with Iain McGilchrist in which he discussed his book, The Master and His Emissary: The Divided Brain and the Making of the Western World.

Pop psychology would have us believe that the right hemisphere is the seat of creativity while the left is where logic dwells.  Thus we explain artists, poets, and creative types as more right-brained and mathematicians and logicians as left-brained.  McGilchrist’s explanation of how the two hemispheres of the human brain work is far more nuanced; the two halves work in tandem but with different intent, as though they were approaching the same task but trying to answer different questions.  In simple, mammalian terms (the divided brain is not exclusively human), the left brain is asking, “How can I get this prey?” while the right is asking, “How can I not become prey?” Survival depends on both of those questions being answered successfully.

The left hemisphere is detail and goal focused. It hones in on a task and executes the steps to completion.  The right hemisphere is big-picture oriented, keeping track of the whole environment,  making connections between pieces, creating meaning from discrete parts.  The interview cites fascinating research about how the two halves function when one or the other is damaged or disabled, and the limitations on the surviving hemisphere when that happens. McGilchrist’s  explanation of how profound the loss of the right hemisphere is, is particularly striking:  Patients with right-hemisphere strokes are no longer able to understand many things we take for granted.  Intonation and sarcasm are two, but chief among the losses is metaphor, which is fundamental to all conceptual understanding.  We understand virtually everything in terms of other things.

Equally interesting is his contention that we glorify and focus too much on left-hemispheric functions,  either boiling complex ideas down to widely divergent, extreme positions and ignoring the nuance and complexity that lies between those spaces, or reducing concepts down to algorithms and separated detail with no overarching meaning attached.

Education is no stranger to this problem.  Often, content is reduced to discrete details with no way for students to make meaning from what they are learning.  Historically, we’ve tried to reduce reading to mere detail (phonics) and to pure meaning without detail (whole language in its misunderstood form) when both are needed to read well.  Almost any primary teacher  can show you a student who can decode text without really grasping meaning.  Decoding is not much help if you are unable to see the big picture that all the little parts make.  Students are asked to memorize dates and events and figures from historical periods without having opportunity to connect personally with the content so they can make meaning; or they are asked to learn quadratic equations or statistical principles without a real-world, hands-on experience to apply them to.  I have even seen Language Arts classes that taught thesis statements without ever requiring the students to write an essay.  The brain needs both — detail and big picture, parts and whole — to learn optimally, but it especially needs the whole:  details “stick” better when they mean something to the student.

“Music is not in the notes; it’s what happens between the notes.”